Right now, there’s a kid whose entire life could pivot around a moment in Baldwin Hall when the admissions director says: “We think there’s enough aid available to allow your son to enroll.”

IMPACT IN ACTION – ARCHITECTURE AT HOPKINS 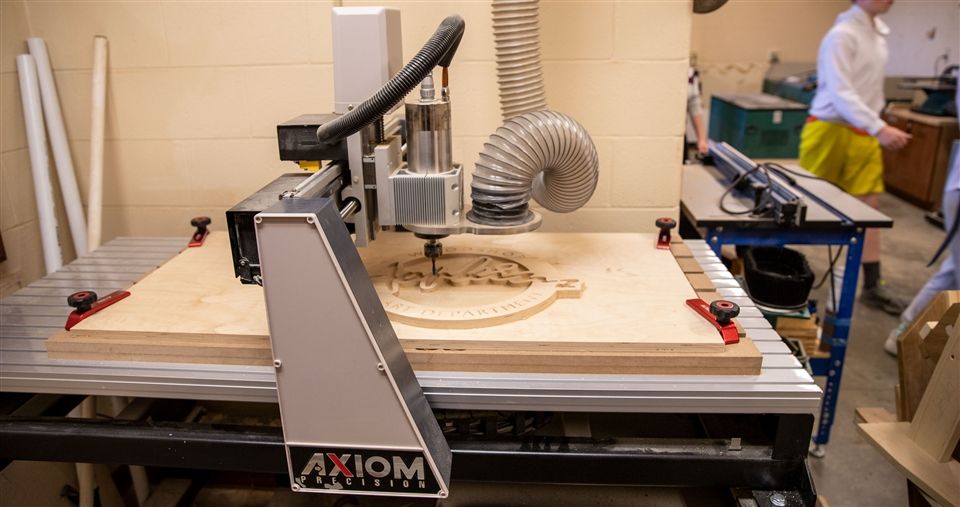 Building a solid foundation that supports higher levels of creativity and achievement is one of the Art Department’s primary goals. This year, students in Hopkins’ Architecture Program are using several new pieces of equipment, including a glow forge and fourth axis on our CNC (Computer Numerical Control) Machine. The CNC is a high-precision tool that makes repeated, accurate movements by taking computer-generated code and converting it with software to electrical signals. With a new fourth axis, students will be able to use the CNC software to cut and create objects in three dimensional forms.
This year, as part of our global education initiative, students are learning to use their new equipment to create pencil boxes as gifts for the delegation from the Yali-Peicui School in China.

IMPACT IN ACTION – A JOURNEY IN EDUCATION

“I am so grateful for having had that opportunity,” Teresa said of her sabbatical. “It was so restorative to have that time without competing and conflicting responsibilities. It is such a gift that Hopkins gave me.”
Dr. Teresa Picarazzi, Hopkins Italian teacher and member of the school’s Global Education Committee, spent the spring semester on sabbatical in Italy. Immersing herself in Ravenna’s tranquil culture and daily rhythms, Teresa divided her time between the city’s magnificent 17th century public library, Biblioteca Classense, and the home of local author Laura Gambi, to work on an English translation of Gambi’s novel, Allora Io Vado. “Every morning, I walked to the Biblioteca, where I would work on my translation, and once per week, Laura and I would sit together and read through the text, line by line,” said Teresa. “It was a truly amazing experience.”
Concurrent to her translation project, Teresa explored outreach and cultural exchange opportunities at high schools in Amalfi, one of New Haven’s sister cities. Last fall, her class began an email and video exchange with students at a high school in Salerno, Italy, and in March, 16 members of the class traveled to Salerno to meet their “pen pals” in person and enjoy an immersive cultural experience.

Impact in Action – Competing on a National Scale

Since its founding in 2009, Hopkins’ Science Olympic, or SciOly Team, has grown from a small program of a few students occupying one room in the Malone Science Center to a team of more than 30 juniors and seniors making full use of two rooms in the Malone building: one as a design space and another for cutting, soldering and turning ideas into reality.
Likewise, the Hopkins Robotics Team has grown rapidly, adding a competitive team that has qualified for both state and national competitions and also expanding to include a Junior School Program as well as a second competitive team.

impact in action - fitness and wellness

The Athletics Department is in the midst of an exciting new year with upgraded fitness equipment in our weight room that continues to raise the bar of the athletics program, enabling coaches to offer more personalized training to address students’ specific fitness needs. Athletics Director Rocco DeMaio said the new equipment will raise not only the level of fitness, but also the level of playing across the spectrum. It includes:

Over the past 10 years, the number of students enrolling in the Hopkins’ orchestra program has doubled. This year, that includes a total of 36 students - 18 in the concert band and 19 in the jazz band. We are excited to have a brand new keyboard with weighted keys for concert performances, in addition to new instruments, including a new bass trombone.
“Students have also been performing more challenging music and playing at a higher level,” notes Bobby Smith, orchestra director and Chair of the Arts Department. For the first time, the Hopkins Jazz Band will be participating in the Princeton Jazz Festival, and will again participate in the Berklee Jazz Festival in Boston.

Hopkins’ Global Education Committee is focused on opening Hopkins’ doors to the global community, bringing transformative, enriching cultural and linguistic experiences to Hopkins students through exchange programs and educational opportunities. As part of these efforts, Hopkins has joined the Yale-China Association and the City of New Haven in establishing a collaboration with Yali-Peicui school in Changsha, China, New Haven's sister city.
Last year, a delegation of more than 10 students and educators from Yali-Peicui visited the Hopkins campus, touching off several days of special projects, music performances, arts projects, presentations and cultural exchanges. In March 2020, during spring break, members of Hopkins’ Chinese program will travel to Changsha for a reciprocal visit to Yali-Peicui. Other global initiatives include the Theater Department’s annual participation in the Edinburgh Theater Festival in Scotland, as well as annual service trips to Guatemala and cultural exchange programs in Italy.