2/3/2017
Artist and filmmaker Ogechi Musa ’10 addressed the Hopkins community at a school-wide assembly presented by S.U.R.E, Students United for Racial Equity, kicking off the celebration of Black History Month.  Using the metaphor of a painting that is created by the parents’ vision of their dreams for their child, Musa shared her journey of personal discovery that led her to “pick up that paintbrush and make my own strokes.”
Musa described how she was quietly interested in the arts but followed the parental nudge toward athletics and traditional academics.  A basketball injury early in her J School year opened up some unscheduled time which allowed her to audition for a role in a play, an experience she credits with confirming her desire for an artistic life.  That desire was strengthened in a creative writing class during her senior year when her teacher noted her natural talents as a writer. “Mrs. Fasano told me I should consider a career in writing,” related Musa.  Speaking directly to the students, she continued, “The faculty knows you. Listen to them.”

Musa entered Boston College as a Bio-Chemistry major but then switched to Psychology, giving her the tools to explore her inner life.  She recounted her college years as of time of trying to find her voice.  “Sit with your emotions and allow yourself to feel” and then dare to speak up.  “Staying silent is not acceptable,” she noted. Immersing herself in writing and acting, Musa found a path as artist/activist, producing films which speak to social change.  “My painting is a masterpiece painted by me.”

Videos from the entire assembly, including a beautiful performance of Patty Griffin's MLK Tribute "Up To The Mountain" by members of the Choir and Faculty, are available on this page.

Following assembly, Musa met with students in Upper Heath to discuss filmmaking techniques and the process of producing a film.

S.U.R.E invites the Hopkins community to participate in celebrating and promoting awareness of black history and culture during the month of February by:
- ​Performing or presenting in Assembly
​- ​Submitting drawings, photos, poetry, and prose to display in Upper Heath
​- ​Attending the two upcoming SURE meetings, Wednesday, February 15 and Wednesday, March 1.
​- ​Proposing another idea you would like to explore
If you are interested in participating, please contact one of the heads of S.U.R.E.—Ben Elbaum, Caroline Stanley and Sabrina Trombetta. 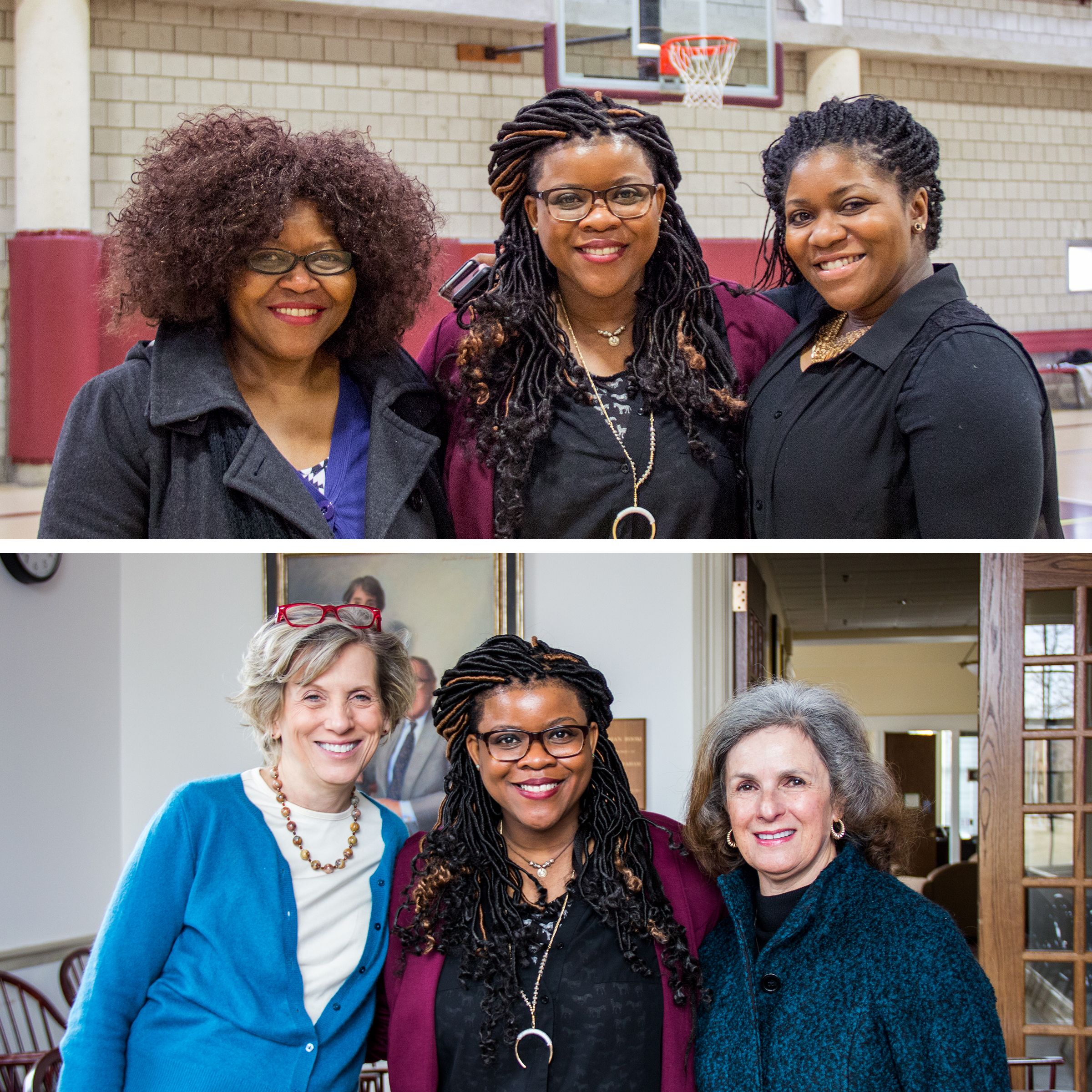 Ogechi Musa '10 with her mom Gertrude and sister Pauline (top) and with her former teachers Hope Hartup and Donna Fasano (bottom).

986 Forest Road
New Haven, Connecticut 06515
(203) 397-1001
Hopkins is a private middle school and high school for grades 7-12. Located on a campus overlooking New Haven, CT, the School takes pride in its intellectually curious students as well as its dedicated faculty and staff.